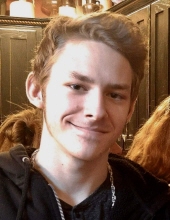 Zachary Michael Allen Perry — of Fishers, IN unexpectedly passed away March 14, 2022, at the age of 23. He was his mother’s first born, on November 22, 1998, in Indianapolis, IN. to Joshua Perry & Amyanne Goddard (Caylor, Perry)
Zachary graduated from Fishers High School in 2017, he had started some college. He spent most of his life in Fishers and had recently moved to Owen County, Spencer, IN with his Mom, Amyanne and Step Father, Joshua Goddard. He was enjoying his new career path with the IATSE local 30, Stagehand Union. He had a love for nature…all creatures, especially spiders, snakes, and his cats. He had a great talent and passion for music producing and songwriting which he went by the pseudonym Lil’Zach. He was so charismatic, compassionate, and spirited. He was a very fun loving, spunky, outgoing, creative, and poetic. He enjoyed playing video games, especially for his favorite video game series The Legend of Zelda and watching Naruto.
He was an amazing son, sibling, cousin, and friend to all that surrounded him!
Zachary is survived by his mother; Amyanne Goddard, father; Joshua Perry, step-father; Joshua Goddard, siblings; Amaya Perry, Kaitlyn Goddard, Linkyn Goddard, grandparents; Dan and Kathleen Garner, Steve Perry, Michael and RuthAnn Caylor, and Carol Goddard.
A funeral and public visitation is on March 26th, 2022 at Indiana Funeral Care, 8151 Allisonville Rd, at 4:30 pm
A celebration for his life and spreading of the ashes will be held at his home, in Owen County on August 27th at 3pm.

To order memorial trees or send flowers to the family in memory of Zachary Michael Allen Perry, please visit our flower store.