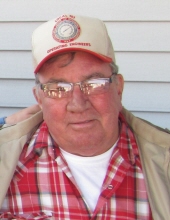 William “Bill” Crumpton, 75, of Indianapolis, Indiana, passed away on May 2, 2022 at home surrounded by his family. He was born on April 2, 1947 in Thompkinsville, Kentucky to E.O. and Beatrice Crumpton.
Bill married Ruth Ann (Billingsley) on December 10, 1966. They lived in Indianapolis, Indiana for nearly 50 years of their marriage until Ruth Ann’s passing in 2017.
Bill was a member of the Local Union 103 for many years. He worked as a Union machine operator. He retired from Poindexter Excavating. In his leisure time, Bill loved to watch Western movies and T.V. shows and playing games on his computer.
Bill is survived by his children, Tammy Colee of Indianapolis, Doug Crumpton (Brandy) of Martinsville, Sherri Belttari of Indianapolis, and Sheila Morris (Jeremiah Smith) of Greenfield; grandchildren, Dylan Colee, Zac Crumpton, Kylie Crumpton, Neil Meek, Chelsea Hancock, Shelby Meek, Tyler Morris, and Elayna Morris; 4 great-granddaughters and 2 great-grandsons. He was preceded in death by his wife, his parents, and his granddaughter, Colleen Colee. Bill was also preceded in death by his sisters, Mary Williams, Faye Warren, Linda Shive, and Joan Spear.
A visitation in Indiana will be held from 4 to 8pm on Wednesday, May 4, 2022 at Indiana Funeral Care - Greenwood: 2433 E Main Street, Greenwood, Indiana.
Visitation in Kentucky will be held on Friday, May 6, 2022 at Yokley-Trible Funeral Home in Thompkinsville, KY. A funeral service in his honor will be held at 10am on Saturday, May 7, 2022 at Yokely-Trible. Bill will be laid to rest at White Cemetery in Sulpher Lick, KY immediately following the service.

To order memorial trees or send flowers to the family in memory of William "Bill" Crumpton, please visit our flower store.