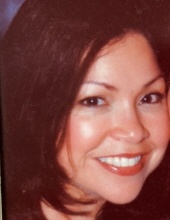 Virginia “Jean” Soto had a strong spirit and a great love for Christ. She was a loyal wife, a caring mother and good friend. Jean passed away in the early morning hours on January 16, 2022.

Jean was born on December 4, 1957, in Chicago, Illinois to Roselina Silva and Theodore Rodriguez. After high school, Jean studied computer technology and moved into a long-standing career with various engineering companies.

Her uncle introduced her to his best friend, Hernan Soto, and told her that the two should be married. Upon meeting, it was evident that her uncle was right and the two were soon married, sharing 45 years together. There were a lot of things that could make Jean smile – her dog, Bob, a delicious meal, dancing, a good joke, the kindness of people around her. But nothing compared to the smile that came across her face when Hernan would walk in the room. This was the case until her last day on this earth. The two of them shared a love to be envied.

When their son, Michael, was born, Jean embraced the role of mother. And when their daughter, Kaleena, came shortly thereafter, their family of four was complete. Jean loved being their mom and while she went above and beyond throughout their lives, Kaleena remembers that it was the simple things that made her the happiest. She tells stories about sitting nearby as her mom put on makeup, marveling at how beautiful her mother had always been. Jean was adored by both of her children.

Jean and Hernan shared the love of Christ with others throughout their lives. They were never shy to share their relationship with God and without a doubt, influenced the lives of countless people along the way to come to know Jesus. Jean wanted it to be known that she was a child of God and desired that this be a part of her legacy for eternity.

Hernan wants to thank Joy’s House for not only providing adult day services to Jean for nearly a decade, but for becoming a second family, for Joy’s House support of him as her primary caregiver and for helping them to make new memories together over the years.

The family requests that no flowers be sent. Instead, donations may be made in Jean’s memory to Joy’s House, 2028 E. Broad Ripple Ave. Indianapolis, IN 46220.
To order memorial trees or send flowers to the family in memory of Virginia Soto, please visit our flower store.