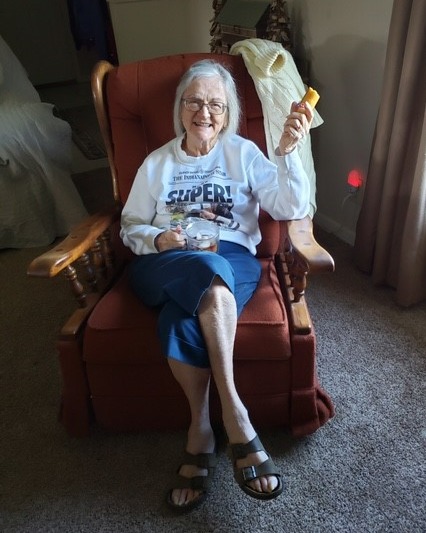 Living at Traditions at Brookside in McCordsville, Indiana.

Born on January 18, 1938 in Wild Cherry, Arkansas to Troy and Mattie Gifford.  JoAnn worked as a secretary at various times in her life, an insurance underwriter and sales assistant for Equitable Insurance, Axa Insurance and Lincoln Insurance.

JoAnn was the heart of her family and was devoted to husband, Bill, and her three children, Dave, Cindy and Karen.  She enjoyed spending time with them on summer vacations and holidays.  She lived in many parts of the country during her life and loved each one for its own character.  She was born in the hills of northern Arkansas.  As a tween, she moved to Indianapolis, where she met her future husband at Arsenal Tech High School.  While living there, they started a family.  Bill’s job forced them to move to Pittsburgh, Pennsylvania in 1968.  She became a lifelong Steelers fan while there.  From there, they moved to Philadelphia, Pennsylvania; back to Indianapolis; Fort Lauderdale, Florida; Surprise, Arizona; Little Rock, Arkansas; Sarasota, Florida and finally back to Indianapolis.  She was quite the traveler and enjoyed each place.

JoAnn was preceded in death by her husband, Bill, her siblings, Leah Dene, Lena Ray and Jerry.  JoAnn is survived by her three children, Dave, Cindy and Karen, her grandson, Dustin, and her great granddaughter Rayne.

In lieu of flowers, memorial contributions are suggested to the Alzheimer’s Association (alz.org) or any charity of your choosing.