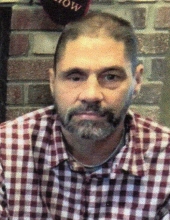 Ty Maynard resident of Indianapolis 54 years old passed away peacefully in his sleep on Sunday morning June 6 at his home.

Ty was born in Greenfield In. attended Warren Central High School and worked as a drywall installer and house painter and did electrostatic metal painting until he was disabled due to complications of diabetes at an early age, but it didn’t slow him down much. He loved fishing and camping and always tried to provide for his family. He liked to work on cars and was pretty good at it.

He is survived by his teenage love Angela Rolf and their daughters Meghan and Courtney and his parents Ethel Cramer and Craig Cramer (step Father), many nieces and nephews and a sister Angela Graves and Brother Chris. He was preceded in death by his Father Charles E . Maynard his Grand Parents and an Uncle Carl Kline.

A memorial service is planned for 7 pm Mon. July 12 2021 at the New Palestine United Methodist Church in New Palestine In 3565 South 500 West.
To order memorial trees or send flowers to the family in memory of Ty Maynard, please visit our flower store.