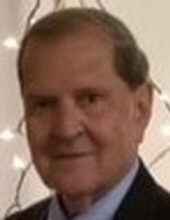 Thomas S. Potts of Fishers, Indiana died Sunday, March 20 at the age of 79. He was surrounded by his loving family at the time of his passing.

Tom was born in Huntington, Indiana on October 13, 1942, and was the son of Max and Elizabeth Potts, also of Huntington. He graduated from Huntington High School in 1960, where he met his sweetheart and later married Patricia S. Altman on June 12, 1965 in Huntington. After high school, Tom attended Indiana University where he was a member of the Beta Theta Pi fraternity. He later graduated from Huntington University with a Bachelor’s of Science Degree and then received his Master’s Degree from the University of St. Francis (Fort Wayne).

Tom’s early professional career was spent at Magnavox / Raytheon (Fort Wayne), where he spent 17 years as Director of Human Resources. His later professional career was spent in the financial services industry working for Edward Jones (Fort Wayne) and Charles Schwab (Indianapolis) from where he retired in 2014. He loved helping others with financial planning and offering financial advice and loved talking about the markets and investing.

In his personal life, Tom was a longtime member of Grace Church (Noblesville + Fishers) and loved spending time with his family, especially his three children, seven grandchildren and one great-granddaughter. He loved watching and attending all kinds of sporting events (especially of his grandchildren!) and was an avid and enthusiastic watcher of Indiana University football and basketball. He also loved bowling, sport shooting, archery, fishing, and being active in many other ways. He particularly loved spending time camping with his family every summer up in northern Michigan for many years.

A celebration of life service will be held on Saturday, March 26, at 3:30 PM at Grace Church, Fishers, and will be preceded by a calling from 1:00 - 3:00 PM. For those unable to attend in-person, the service can be live-streamed at https://gracefishers.online.church/.

Memorial contributions may be made to Grace Church Fishers or Huntington University.

To order memorial trees or send flowers to the family in memory of Thomas Potts, please visit our flower store.