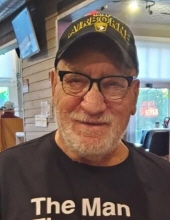 He was born Tuesday, June 16, 1942 to the late Joseph Crosby and Margaret L. (Rayburn) Warner in Indianapolis, Indiana.

He was preceded in death by his parents, Joseph Crosby and Margret Warner; his siblings, Robert Warner (Mary), Margie Gardner and Joe Warner (Barbra); and grandson Tyberious Garrett.

Thomas proudly served in the United States Army as a Screaming Eagle of the 101st Airborne. After his Military service, he worked tirelessly for Ertel Manufacturing for 30 years, where he received a 25-year award for perfect attendance.

No one that crossed paths with Thomas forgot his infectious personality. To those who didn't know the personal side of Thomas, he was a man of few words with an appreciation of the little things in life. To those who he truly loved, he couldn't tell you enough how much he loved you and how proud of you he was. He will be deeply missed by his family, friends, and all who knew him.

Funeral service with military honors will begin at 4:00 pm.

In lieu of flowers please consider making a donation to Go Fund Me https://www.gofundme.com/f/memorial-fund-for-tommy
To order memorial trees or send flowers to the family in memory of Thomas Lee Warner, please visit our flower store.