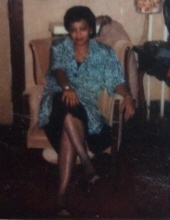 Thersia was born in mullens west virginia, to the late charles r.banks and frances l.banks.
Thersia was raised in west virginia,later moving to hempstead new york,where she completed her high school equivalency diploma. soon after she met the love of her life her late husband melvin toombs. thersia also attended Island drafting and technical institute, graduating with a digital electronics degree. thersia worked for lundys for 10years. thersia attended the college of west virginia and worked for the state hospital in beckley west virginia, until moving back to new york.
thersia was well known as "peaches" and will always be Ms.peaches. Peaches was also known for her smile and spunky attitude, she loved doing her crafts as well as her love for cats "lil girl" is what she called her.
peaches was always honest, and loving when it came to her family and we will all remember her as a strong black woman.

residing in west virginia, new york and indiana, she will be missed by many.

To order memorial trees or send flowers to the family in memory of Thersia Banks, please visit our flower store.