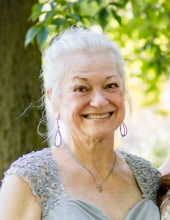 Susan Louise Grosvenor Haisley,
72, passed away peacefully, and surrounded by family on February 18, 2022.

Susan was born July 30, 1949 in Albany, NY. She was the youngest of three children, often referred to as “Slug” by those closest to her. Susan moved to Ft. Wayne, IN with her family at an early age, and then again to Indianapolis where they would permanently settle. It was there she would meet the love of her life, Dave. The two began dating at the age of 14 and would remain together through high school and college. We would later say that God brought Dave into Susan’s life at such a young age as an apology for taking her father when she was just 6 years old. It was destiny.

Anyone who knew Susan knew she was a more-than-gifted singer. At the age of 16, she began studying with the talented Miriam Ramaker as her youngest student. During that time, she was offered a position with the Metropolitan Opera in NY, but declined as her mother insisted that she first finish school. Susan graduated Broadripple High School, Class of ‘67, and went on to attend Indiana University in Bloomington, IN, where she majored in Vocal Performance. While at IU, Susan performed in numerous concerts, recitals, and operas such as Carmen (her favorite) where she played the lead role of Carmen. Susan was also a member of the Sigma Alpha Iota Sorority. After college, Susan pursued her other passion, Dave, marrying him on May, 30 1971. They would go on to raise three children.

Susan was a proud member of the St. Paul’s Episcopal Church Choir in Indianapolis and served as the staff soprano for 37 years under the direction of Frank W. Boles. One of her greatest joys was being able to share her love of music with her husband and children as each had also been members of the choir. Susan also sang with one of her daughters in the Indianapolis Pro Musica, a chamber choir focused on the art of a cappella singing.

Susan had one of the best sense of humors around. She was always quick to share a dirty joke or laugh at her own expense. She knew the value of a smile and a laugh and did what she could to spread them both. Susan was also an open book who never met a stranger. We would joke that within 5 minutes of meeting her, you’d know the Haisley family history! She enjoyed acts of service, whether it be packing meals for local shelters, or helping children with special needs on the school bus she rode as an aid. Susan loved everyone and did so without expecting anything in return.

Susan is survived by her husband of 50 years, David Haisley; her brother, Bruce (Linda) Grosvenor; her children, Noah Haisley, Anna (Chris) Corbit, and Sara (Michael) Robison; her granddaughter, Ella Corbit; her nieces and nephews, Jeni, Jayne, Chuck, and Bryan, and many cousins, great nieces and nephews, and friends. Susan is reunited in heaven with her parents, Bruce and Juliette Grosvenor; her sister, Diane (Gene) Johnson; and her nephews, Gene Johnson Jr. and Scott Grosvernor.

Despite being sick for so many years, Susan continued to live life to its fullest. She is now free of her pain and undoubtedly leading the sopranos in His choir of angels. Listen carefully and you will hear her song.

To order memorial trees or send flowers to the family in memory of Susan Louise Grosvenor Haisley, please visit our flower store.