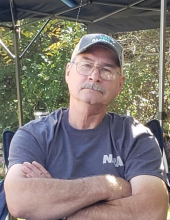 On Thursday, July 29, 2021, Steven Kent Delahanty, husband, father and beloved grandfather passed away at his home at the age of 63.

Steve was born on January 22, 1958 in Valparaiso, Indiana to Mary Wright-Daily and Donald Delahanty. He became a carpenter as a young man, and became highly regarded throughout the state, for his cabinetry expertise, and other excellent carpentry skills. On February 14, 1986 he married the love of his life Barbara Lee Delahanty (Deschaine), together they raised one son Phillip Wayne Delahanty.

Steve was a master craftsman and had a passion for fishing and camping with his family, friends and his two dogs, Oscar and Zoey. He loved to spend time with his grandsons. You could often find them building things together in the wood shop, having big campfires in the back yard, or just hanging out together. He was known for making the best French toast in the whole world, according to his grandsons.

Steve was preceded in death by his father Donald.

He is survived by his wife Barb, his son Phillip (Savannah), his grandsons Justin and Julian, his sister Dawn, and his mother Mary (Ed).

A celebration of life will take place at a future date.
To order memorial trees or send flowers to the family in memory of Steven Kent Delahanty, please visit our flower store.