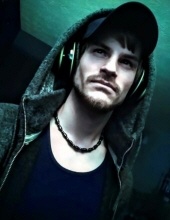 He was born Thursday, November 1, 1990 in Johnson County, Franklin, IN to Cletus Shawn Weaver Sr. and Melinda Kay Craft.

Steven spent his time between work, friends, and making everyone laugh. He was always full of energy and making time for those around him. He enjoyed tinkering with his cars as well as Super Man apparel.

Steven was a member of the Wal-Mart team for the last 5 years. His most recent position was helping the team setup new displays and setups in Wal-Marts as part of the SWAT Team.

His interest was fast cars, getting all the kids to have fun, Brazilian Jiu-Jitsu, basketball, hanging out with friends and family.

He is preceded in death by his father, Cletus Shawn Weaver Sr; grandmother, Janet Harris; and grandfather, Charlie Craft.

Memorial service will begin at 2:00 pm
To order memorial trees or send flowers to the family in memory of Steven J. Weaver, please visit our flower store.