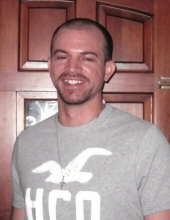 He is survived by his wife, Jennifer (McCaslin) Styer; his children, Trey, Brynn, Grant, Dalton, and Quinton; his parents, Steven D. Styer and Melinda (Brown) Styer; and his sister, Amanda Styer.

Stephen was a 1995 graduate of Franklin Central High School, where he earned several varsity letters in track and wrestling. Then, he earned a degree in Computer Science from Kaplan College. He loved long distance running, he did it since high school.

Stephen relished coaching his kids’ sports teams, his Ford Mustangs, and playing drums and guitar. In his younger years, he was an avid bowler and was the Indianapolis Singles Champion in 1992.

The greatest loves of his life were his wife, Jennifer, and his children.

In lieu of flowers memorial donations can be made to his children c/o Jennifer Styer.

To order memorial trees or send flowers to the family in memory of Stephen G. Styer, please visit our flower store.