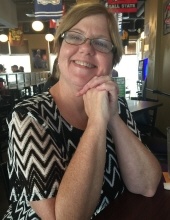 Stephanie Mary West, 57, passed away in her Indianapolis home on Tuesday, October 12th, after a long battle with cancer.

Born July 3, 1964, to Carl and Cordelia (Hoog) Schebler in Batesville, Indiana, Stephanie attended the Oldenburg Academy of the Immaculate Conception. Upon graduation, she enrolled at the University of Indianapolis, where she graduated with a degree in Psychology. After that, Stephanie went on to attend nursing school at the Good Samaritan College of Nursing in Cincinnati, Ohio, where she graduated with a degree in Nursing (RN) in 1991. That same year, she began work at Methodist Hospital and met her future husband, Michael West, whom she married in August of 1992.

Her first cancer diagnosis came in 2012. When a successful surgery to remove the tumors left her unable to do bed-side care, she went back to school to earn a third degree - a Bachelor of Science in Nursing (BSN), then accepted a new position as a Care Coordinator at University Hospital on the campus of IUPUI, where she remained employed until the day of her death.

Stephanie loved her family and her dogs. She loved Hallmark Channel Christmas movies, a good glass of wine, "girls trips" with her friend Linda Amick, and morning walks along the beach in Hilton Head, South Carolina. Her laughter, her unique way of looking at the world, and her willingness to help others endeared her to all who met her.

Preceded in death by her parents, Stephanie is survived by her husband, Michael, her two children, Kyle and Ryan, her daughter-in-law, Grace, and many other family members, co-workers, and friends who will love and remember her always.

Visitation will be at Indiana Funeral Care, 8151 Allisonville Road, Indianapolis, IN 46250 on Monday, October 18, 2021 from 4pm - 6pm.
To order memorial trees or send flowers to the family in memory of Stephanie Mary West, please visit our flower store.