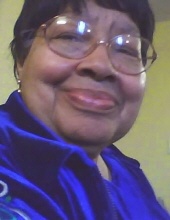 Stella Coker Martin Pullen was born to the late Fred Martin and Florence Buford Martin on July 9, 1931 in Pulaski, TN. She was the second oldest out of five children. She attended Bridgforth High in Pulaski, TN.
Stella Pullen confessed her life to Christ at an early age. She later relocated to Indianapolis, IN in 1956 where she attended True Stone Primitive Baptist Church under Rev. A. J. Perkins, and then the church became True Stone Missionary Baptist Church under Pastor Jerry Pullings. She was a proud usher and choir member. She also was the secretary on the usher board. She later became a member at Little Bethel Missionary Baptist Church under the pastoral of Pastor Troy E. Ladd and later became Pastor Shalmon T. Radford.
Stella Pullen united in holy matrimony to the late William A. Pullen in 1959, to this union two children were born. The first born is the late Dennis Pullen, Sr and then Sheila (Marc) Lewis.
Stella Pullen worked at a laundry mat when she relocated to Indianapolis and then years later she became a licensed childcare worker. She loved watching kids. She had watched over a host of children before she had retired. She didn’t have a mean bone in her body, but she sure had a boomerang throw with a bedroom shoe. She threw that bedroom shoe at Donté and Tyrone for wrestling on her bed, over the TV remote. That was one thing she didn’t allow, was for the kids to be playing on her bed. That was a big no no! In her spare time, she loved baking and sewing. She would do anything to help you out with cooking and sewing or anything you needed help with. After she retired, she picked up the hobby of coloring and word search books.
Stella Pullen departed this life on Wednesday, January 19, 2022 at the age of 90. She was preceded in death by her late husband William A Pullen, one son Dennis Pullen, Sr, her parents Fred and Florence, one sister Ina Kimbrouth and one brother Clarence Martin. She left behind one daughter, Sheila (Marc) Lewis and one goddaughter, Jonnette Baker and four grandchildren, Geniá LaRue, Dennis Pullen, Jr, Donté Lewis and Shonnelle Lewis, as well as a host of great grandchildren. She also left behind two sisters, Lucille Buggs, Pulaski, TN and Patricia Cross, Snellville, GA, as well as a host of nieces and nephews.
To order memorial trees or send flowers to the family in memory of Stella C Pullen, please visit our flower store.