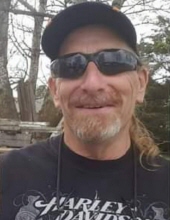 Tony was born in Anderson to Robert McClintock and Jeanne McClintock. He graduated from Shenandoah High School. He was also a member of the Sons of American Legion.

Tony loved his daughter and her family. He coached her softball teams for years and always took an active part in all of her activities. He was very involved with his grandson's life as well.

Also surviving are his brother Steve McClintock and wife Janet, sister Kathy Barkdull (Derrick Goudy), several cousins, nieces and nephews, and numerous long time friends. He had a loving heart and will be missed by them all.

Tony was preceded in death by his mother and father as well as his two sisters Kelle McClintock and Jolene Bullock.

To order memorial trees or send flowers to the family in memory of Stan Anthony McClintock, please visit our flower store.