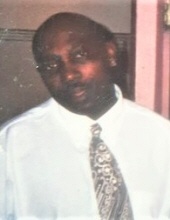 He attended Lew Wallace High School and later moved to Indianapolis in the late 1980’s. He claimed the Indianapolis Colts as “His Team”. Stacey had a huge interest in comics and music. His quick wit, warm smile and sense of humor is legendary.

Stacey worked in the fast-food industry until his illness became progressive.

Stacey quietly went home on March 3, 2021 at 4:18 pm with family by his side.
He is preceded in death by his sister, Carolyn Ann (Benton) Thomas.

Stacey leaves to cherish his memories his children, Brandon Allen Love and Katherine Marie Masters; two sisters, Gail M. Ligon and Jamese (Ahmed) Hmaide; two brothers, Ricky O. Ligon and Darryl (Janet) Daniels and a host of nephews, nieces, and family. He will be missed by all.

Funeral service will begin at 2:00 pm with Pastor Reginald Fletcher Officiating.
Burial will immediately follow at Mt. Pleasant Cemetery, Greenwood, Indiana.
To order memorial trees or send flowers to the family in memory of Stacey A. Love, please visit our flower store.