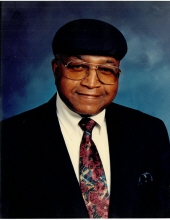 Mr. Sherman Laster, Sr. peacefully departed this life at the age of 91 on Friday, February 4, 2022, in Indianapolis. He was preceded in death by his beloved wife Kay E. (Sanders) Laster, brothers: Hollis Battle, of Georgia, John Henry Battle, of Michigan, Willie Battle and Robert Lee Battle, of Ohio. There is one surviving sister, Ella Battle of New York.
Sherman Laster, Sr. the son of Sherman Battle and Annie “Candie”( Woodley) Battle, was born at 10:00 am, at home on April 14, 1931, in Georgia. After his father died, Sherman was adopted by Mr.& Mrs. Laster of Forsyth, Georgia.
Sherman graduated from High School twice; Hubbard Training School in Forysth, Georgia then Crispus Attucks, in Indianapolis, Indiana. He studied Business at Lane Business College, in Indianapolis. Later he was licensed to teach Dry Cleaning.. Sherman served the community as sole proprietor of “Spot Out Dry Cleaners” near 34th and Capitol, specializing in the removal of spots, spills on anything from leisure suits, fur hats, wraps, to mink stoles.
Sherman Laster served in the U.S. Army, a Private First Class during the Korean War and received an Honorable Discharge. As a retired Veteran he became a member of the Hillman H. Harpole American Legion Post 249, in Indianapolis.
During his life he was employee of United Technologies Carrier Corporation for over 25 years. During his time there he was “never absent, never late” for performance record.
Sherman was a devoted Husband, Father, Grandfather, Great-Grandfather, Brother, Uncle and Friend. He loved the rustic art of Barbequing on the outside grill for family, country and community. He was a connoisseur of homemade wines for gift giving purposes only. He was a passionate lover of music. Amongst his favorites were; Ray Charles, James Brown and Sarah Vaughn. Ever the outdoorsman, he was an avid fisherman, golfer, camper and gardener of a variety of things – many loved his mouthwatering Georgia greens and ripened tomatoes.
Sherman was baptized and was a faithful of Holy Angels Catholic Church.in Indianapolis.
He leaves to cherish his memory two sons and three daughters; Sherman Laster, Jr., Kevin Laster, Angela (Laster) Rutland, Theresa Montgomery, Diane Laster, several grandchildren, and great grandchildren; a host of nieces, nephews, cousins and friends.

To order memorial trees or send flowers to the family in memory of Sherman Laster, please visit our flower store.