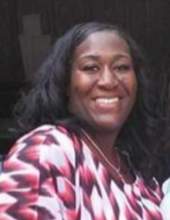 Sharvella Louise Hill, the daughter of Louise M. Williams and Allen D. Williams, entered this world on May 22, 1981 in South Bend, IN. She was the mother of 3 beautiful children, Tylanesia McNary, Javin Hill, and Jatylin Hill. Recently, she became grandmother to JaKaylin Hill.
Sharvella was known as “Vella” to her family and friends. She loved being surrounded by her loved one at all times. Everyone knew that if Vella was at your event, there was sure to be a good time.
Early in life, Sharvella established herself as the protector of the world. She made it her mission to always protect her little sister Tish as well as anyone else she felt needed her. After traveling the world with her family via the military, the Williams family settled back in South Bend, IN. It was there that the infamous cousin crew of Vella, Tish, Toya, and Keisha began its rule in South Bend. The stories heard from these adventures would keep you in tears. Sharvella fully blossomed during her years at John Adams High School. These were the years that her, Tish, Niesha, Geneco, and Shadra formed a bond that couldn’t be made closer if they were all blood.
Sharvella continued her mission of care when she became a CNA. Through this career, she touched the hearts of everyone she cared for. Her patients loved her so much that they had a tendency to adopt her into their families. Her Loving soul was infectious, and hard to deny.
Sharvella leaves to cherish her loving memory her parents Louise Williams and Allen Williams; her children Tylanesia (Jaylen) McNary, Javin (Kaleah) Hill, and Jatylin Hill; siblings Latisha (Takeshia) Williams and Alex Williams; grandson Jakalin Hill; and her “favorite niece” Trevyanna Williams; a host of aunts, uncles, and cousins. She is proceeded in death by her maternal grandparents Ina Jean (Stuckey) Hill and Cleavon Bradshaw, paternal grandparents Diane Smith and Joseph Williams, Uncles Robert Earl Stuckey and Keith Hill, and aunts Pamela Perry and Angela Bennett.
Sharvella didn’t believe in Goodbyes, so “see you later sis…”
To order memorial trees or send flowers to the family in memory of Sharvella Louise Hill, please visit our flower store.