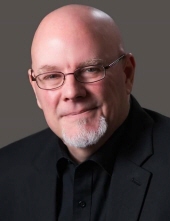 Scott E. Isenhart, born April 18th 1964, transitioned Wednesday, September 1st, 2021 to be with his Higher Power. Scott was a family man, a loving husband & father, and a fierce friend. He shared a deep and special love with his wife, Sonja Young Isenhart, together for 29 years and married for 27. They were two souls with their own traumatic histories who found each other in the dark, nurtured each other in physical and spiritual health and growth. They managed to build a family filled with light, love and magic that has stood strong together through their own unique challenges.

Being a dad was one of Scott's greatest joys, he was involved with each birth; being the first person to welcome each of them into this world, he cultivated an ever lasting relationship with his children. Scott and his oldest son Zach shared a love of music, cars, and ponderous knowledge; with his son Bryson he shared a love of cars and music too, as well as knives and swords; Emily his youngest, his Pumpkin, shared a love of movies and animals with him. Scott's favorite holiday was Halloween and every year Scott would set up a haunted graveyard outside the house, to which the neighborhood children affectionately referred as the Michael Myers house. This instilled the family’s love of Halloween and haunted houses. Scott loved to be spontaneous and surprise his family with trips, movies, entertainment, and simple family fun creating memories that we cherish always.

Scott was in sales and marketing for most of his adult life. He most enjoyed his time in radio at Rock 107 that later became Radio Latina, and as a concert promoter for bands such as Korn, Ozzy Osbourne, Disturbed, Pantera, Santana, and Alice Cooper to name a few. Another industry he was fond of was that of RVs (Tom Raper's and Walnut Ridge.) Scott can also be found educating children and adults alike as the narrator of the Dinosphere at the Indianapolis Children's Museum.

In his recovery through a 12 step program he practiced their spiritual principles and celebrated 29 years clean. Scott’s purpose was to help as many newcomers to the program as he could because to him they were the most important person in the room. He was available to anyone on this same path, day or night; just one way he felt that he could be of service. Because of his commitment to be more self aware Scott was also a member of the Man Kind Project, Lodge Keepers Society, and the Center for Creative Learning. Scott's motto was "Do the next right thing."

Scott was proceeded in death by his parents Ida and Maurice Isenhart, a special friend William Sid Sims, and a special cousin-in-law Paul Young Jr.

Scott leaves behind the love of his life Sonja, his three children Zach, Bryson, and Emily; all of Indianapolis. Two sisters Vicki (Mike) Foley and Barbara Beres; both of Richmond.

A Celebration of Life for Scott will be held Saturday, September 11th at 6 pm; located at All Souls Unitarian Church, 5805 East 56th St., Indianapolis, Indiana 46226.

Due to the rise of Covid cases, social distancing and face masking are mandatory
To order memorial trees or send flowers to the family in memory of Scott E. Isenhart, please visit our flower store.