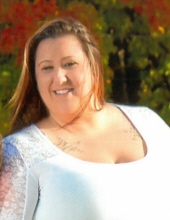 A lifelong resident of Indianapolis, Savannah graduated from Covenant Christian High School in 2005 and attended Vincennes University and IUPUI. Savannah loved the water and became interested in synchronized swimming while taking swimming lessons at the IU Natatorium. She swam with the Indy Synchro team under Coach Julie Thaden for 7 years.

Savannah met the love of her life when her son Nolan was born and she quickly changed her priorities to make sure his needs were met. Nolan played football in the Warren Central Football League where Savannah was his biggest cheerleader. She served as the official team mom for many years, generously volunteering her time by communicating with other parents, ordering shirts and crafting team spirit materials. She was also the loudest person in the stands, next to her stepdad, when Nolan’s team scored. She enjoyed nothing more than packing her car with Nolan’s teammates and heading off to a game.

Savannah attended home ownership and personal finance classes through the Indianapolis Neighborhood Housing Partnership. As a single parent, at 25, she purchased her first home. She was incredibly proud of this accomplishment. When the market began to recover, she sold her first home and purchased her second. She encouraged her friends to become homeowners telling them “If I can do it, you can do it.”

Savannah had a huge heart and a generous spirit. She enjoyed buying gifts for friends and family at any time of the year and loved family gatherings. She helped her friends when they experienced hard times, often taking them in for short periods. And it was not unusual to see one or two children tagging along with her to a football game just because she wanted to spend time with them.

Savannah was a 7-year employee of Williams Comfort Air where she had recently been promoted to dispatch manager over a tri-state region. Just as in the rest of her life, Savannah gave 125% at work, often taking calls from repairmen after hours. Her supervisor noted that no one knew more about the inner workings of the company than she did.

Visitation Wednesday, October 6, 2021 from 5-8 pm Indiana Funeral Care, 8151 Allisonville Road. A Celebration of Life will be scheduled at a later date. Please post memories and condolences at www.indianafuneralcare.com.
To order memorial trees or send flowers to the family in memory of Savannah Christine Blevins, please visit our flower store.