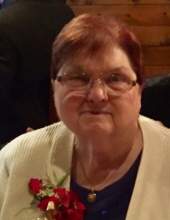 On March 7, 1966, she married the love of her life and soul-mate, Frederick Anthony Holzer, in Detroit, Michigan. Sandra and Fred moved their family from Buffalo, NY to Michigan City, IN in 1978 after Fred, who worked for Bethlehem Steel in the Lackawana, NY plant, was transferred to the Burns Harbor, IN plant. Sandra worked as a Certified Nursing Assistant for many years in Buffalo, NY as well as at the old Memorial Hospital in Michigan City, IN. In her later years she worked as a receptionist for the local YMCA in Michigan City, IN. She was a member of Queen Of All Saints Catholic Church in Michigan City, IN. Sandra was an avid bowler and held several positions on the bowling leagues she attended including President, Secretary/Treasurer and Team Captain. Sandra and Fred enjoyed bowling together with their family, as well as going to the casino and she was a life long Buffalo Bills fan. She was a loving wife, mother, grandmother, aunt, and friend. She would have done anything for her family and she will be deeply missed.

Preceding Sandra in death were her beloved husband, Fred in March of 2018, her oldest son, James Anthony Holzer in February of 2019, her mother, Winifred Beckler, her stepfather John Beckler, her brothers, Darrell and Drake Chwiej, best friend, Sharon Parson, as well as many beloved pets including Billy the Beagle and Toupee the cat.

A Mass of Christian Burial will be held at 10 a.m. on Thursday, November 4, 2021 at St. Matthew Catholic Church, 4100 E. 56th Street, Indianapolis, IN 46220. Visitation will be held the evening before, Wednesday, November 3, from 6 to 8 p.m. at Indiana Funeral Care, 8151 Allisonville Road, Indianapolis, IN 46250.
To order memorial trees or send flowers to the family in memory of Sandra Marie Holzer, please visit our flower store.