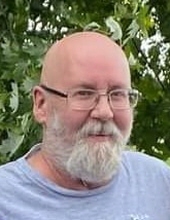 Sander Marshall Moreland, 57, passed away on December 21, 2021, at his Indianapolis residence. Marshall was born July 9, 1964, in Indianapolis to the late John and Karen (Sheets) Moreland.

Marshall graduated from Whiteland Community High School in 1983. He was an avid Colts and NFL football fan.

He is survived by his wife, Janell Brown of Evansville; Sisters, Kelly (Dave) Miller of Greenwood; Jayne (Scott) Byrd of Greenwood, Shannon Caldwell of Indianapolis; Grandkids, Baileigh, Dean, and Michael Whiteman; and several nieces and nephews. He was preceded in death by a daughter, Aimee (Moreland) Whiteman, and a sister, Jeanne (Moreland) Chaney.


A celebration of life will be held on Saturday, January 29, 2022 from 1-4pm at the Greenwood VFW, 578 Commerce Parkway W. Drive, Greenwood, IN 46143. The family is requesting that everyone wear colts apparel if available.
To order memorial trees or send flowers to the family in memory of Sander Marshall Moreland, please visit our flower store.