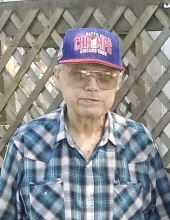 Mike passed away at Community Hospital Anderson on December 23, 2021.

He was a proud Vietnam War Veteran. He loved spending time with his family whenever he could. He was an avid Cubs fan and enjoyed fishing.

Mike was born to Roy and Claudia Hudlin in Anderson, Indiana on February 26, 1947. He attended school in Alexandria , Indiana. He played baseball in high school, but was then drafted into the Vietnam War. He got his GED in the Airforce and was a Sp Sergeant in Denang, Vietnam. In 1969 Mike met and married Linda. They had a son Joseph Michael Hudlin who was stillborn. In 1976 Mike met and married Amy's mother, Patricia Meredith (deceased) who already had a son, John Meredith (deceased). He was an over the road truck driver back in 80's. He helped to care for his parents when they were ill and elderly. He had a good singing voice and sang at Gaither studios.

Services are pending.
To order memorial trees or send flowers to the family in memory of Roy Michael Hudlin, please visit our flower store.