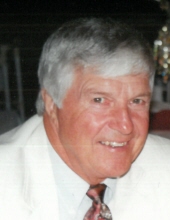 Roy was preceded in death by his parents, Thomas and Edith, twin brother, Russ, and his wife of 62 years, Arlene.

Roy was born into the farming life. He and his twin brother, Russ, helped work the family farm from a very young age, until they were drafted by the Cleveland Indians in 1953. Through Roy’s life, he continued to find peace in mowing a pasture or two.

Baseball was always a large part of Roy’s life. He played minor league ball and also inspired and mentored young ball players through many years of coaching Knothole Baseball around the Cincinnati area. Roy finished his ball career playing senior softball in which he was part of several National Championship teams.

Roy was a dedicated employee of multiple Cincinnati beverage companies, including hometown favorite, Hudepohl Beer. After retirement, Roy worked in the security department for the Cincinnati Reds organization.

Roy was loved by many and will be greatly missed. There will be a celebration of life reception planned for later in the year. Donations in Roy’s memory can be made to: Still Waters Adult Day Center, 7160 Shadeland Station, Indianapolis, IN 46256. (www.stillwatersadc.org).

To order memorial trees or send flowers to the family in memory of Roy Lee Nixon, please visit our flower store.