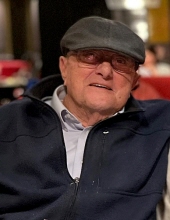 Beloved father and grandfather Ronald “Bo” Leland Keal passed away on December 21, 2021 surrounded by family after being diagnosed with lung cancer in the fall. He is predeceased by his much-loved wife Bonnie (King) Keal who he shared 45 wonderful years of marriage with.
Born in Connersville, Indiana on December 21, 1937, to the late Charles and Geraldine (Irrgang) Keal, Mr. Keal made friends wherever he went. He was incredibly generous with his time, money, and love and could make anyone laugh.
As a child he was known to be a bit of a rascal who could escape trouble with his impish charm. He carried that charm through his service in the US Military (1955 – 1961) while deployed in Europe during World War II reconstruction and throughout the rest of his life in Marion, Indiana.
Mr. Keal is survived by his only daughter Rhonda (Ed) Brandt and three grandchildren Nicole, Corey, and Caitlen (Scott Habusta) Brandt all of Indianapolis. He was excited to learn shortly before his death that he had a great-granddaughter on the way, due in April 2022.
Visitation will be from 9 to 11 AM on Monday, December 27, 2021, at Indiana Funeral Care, 8151 Allisonville Rd, Indianapolis, IN 46250. A celebration of life service will be held at 11:00 AM at the funeral home. He will be interred at Marion National Cemetery, Marion, Indiana with his late wife.
Memorials may be given to the Flannery-Keal Home or the American Lung Association.
To order memorial trees or send flowers to the family in memory of Ronald Leland Keal, please visit our flower store.