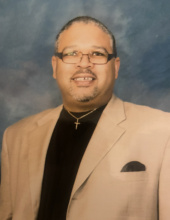 Ronald soon started his career as a stylist in the beauty industry. After receiving his cosmetology license, he started working as a stylist at the Pan Am Plaza. Soon after that he opened up his own in home salon known as “Goldenstyles,” and over a decade later continuing his business now known as “Mr. Ron Styles.”

Ronald married Jacqueline M. Golden (Hyche) in 1989 and in that union they were blessed with two beautiful children, Ronald DeWayne Golden II, and Jasmine Marie Golden. His children were his world. He had high hopes for his children and wanted nothing but the best for them.

Ronald loved to travel in his spare time. He traveled all over the country doing hair and exploring the world. Ronald was a big sports fanatic, especially when it came to basketball. His favorite sports teams were the Indianapolis Colts and the Indianapolis Pacers. He was able to make it to what was now his final Colts game in 2021. Ronald will be remembered for his bubbly personality, uncontrollable laugh, and the passion he had for styling hair.