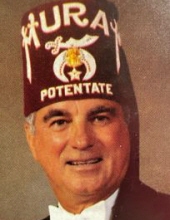 The earthly odyssey of Roger Raymond Mosser ended on January 20, 2022 after a busy trip which started in Reading, PA. on April 1, 1931. Roger was the son of Ammon and Elenore Mosser and is now with the Lord Jesus after a long and successful life.

After graduation from Reading High School, Roger was selected to attend General Motors Institute in Flint, MI. He served in the United States Navy and Naval Reserve as Lieutenant Commander. Roger spent most of his working career as a Contracts Director for General Motors with Allison Transmission and Allison Gas Turbine in Indianapolis.

Roger was a born leader. He held leading positions with the Plainfield Elks Club, Plainfield Masonic Lodge, the Indianapolis Scottish Rite and the Murat Shrine Temple. He was honored with the Sagamore of the Wabash award in 1991 by then Governor Evan Bayh.

A small family Memorial Service will be held at the Hoosier Village Chapel on January 28, 2022, presided over by Chaplin Ron May. Roger will be interred at Maple Hill Cemetery in Plainfield, IN.
To order memorial trees or send flowers to the family in memory of Roger R. Mosser, please visit our flower store.