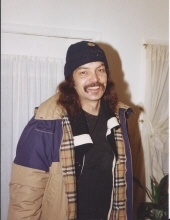 Robert T Rowland is cutting down trees in heaven today.

Bob started out working at Standard Grocery but soon found a job taking down trees and then went into business for himself. He did such a good job, his customers voted him into Angie's List as a provider and for the last 25 years, he didn't have to advertise. His customers passed his name around to their friends.

On December 31, 1999 Bob married his sweetheart Carol for Y2K. A lot of their friends were stocking up on emergency goods and planned on hiding in their basements but not Bob and Carol. They decided they didn't want to face the Millennium without each other and had a small wedding in their home.

A lot of his friends knew him by his nickname "Zef" and he never knew anyone he didn't like. He had friends not only all over town but when traveling out of state, people would come up to him and knew him. Bob tried to spread his good will around to everyone. Every year, he bought winter hats and gloves and would stop when he saw someone walking without a hat or gloves and pass them out to the needy and always participated in the neighborhood cleanup. When in San Francisco, the only way he would agree for his wife to buy him a new jacket was when she suggested he could give his old one to a homeless person.

Bob felt like he had done his job if he had succeeded in making his Mother laugh every day. If you know his Mother, tell her a joke and tell her that her son sent you.

A Celebration of Life is being planned for October 30, 2021 at the American Legion Post 34, 2210 E 54th St from 1 to 4. Please bring a story about our beloved Bob.
To order memorial trees or send flowers to the family in memory of Robert Thomas Rowland, please visit our flower store.