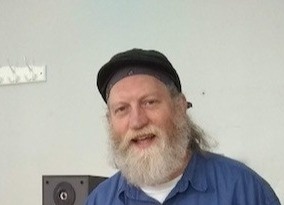 Robert Wayne Shaw, known as Bob, was born April 21, 1958 in Anderson, Indiana, one of three children born to Clarence Robert Shaw and Beverly Elaine Hendricks Shaw.  Bob passed from this life on September 15, 2022 at the Community North Hospital in Indianapolis at the age of 64 years, 4 months, and 24 days.

Bob attended Anderson schools.  His lifetime work was as a self-employed independent handyman carpenter, able to fix just about anything, having natural skills much like his father. If he couldn’t figure it out, he would stick to it until he did figure it out. Bob was married to Janice Casey on April 19, 2005 at Holiday Park in Indianapolis.  They had 17 years of marriage.

Bob’s passion was music.  As a young boy, he picked up a guitar and learned how to play on his own, filling the house with the sounds of familiar rock songs. As he developed his gift, he played lead guitar for Pack of Chihuahuas and then later Midnight Smith.  Music was to him a necessity of life, even saying if he couldn’t play music, he didn’t have much reason to live.  Bob was very much an independent thinker with a strong commitment to Libertarian views.

A memorial service will be held Thursday evening, September 29 at 7:00 pm at Faith Church, 9125 North College Ave., Indianapolis; visitation prior to the service from 6:00 pm.

For assistance with extensive medical bills, a GoFundMe page has been established at https://www.gofund.me/f0a5accf

To order memorial trees or send flowers to the family in memory of Robert Wayne Shaw, please visit our flower store.