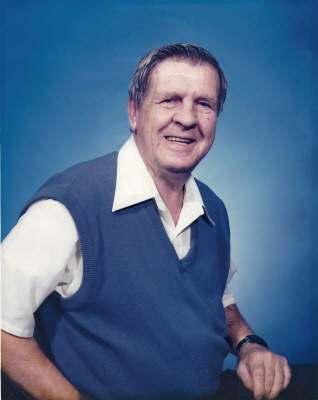 In the wee hours of Christmas morning, 2021, a good man died. He was not a perfect man; he was not a saint; he was kind and smart and generous of himself. He loved reading books; most of all poetry, spy novels and murder mysteries. He loved puzzles and sports and betting on sports. He was passionate about politics.

He believed in people. He believed in the dignity and value of all people, no matter where they come from or their station in life. He felt the "little guy" was worth standing up for against the forces that discredited them and their work. This drove his passion for organized labor and he was often in a leadership position in his local union.

He was survived by more than his immediate family. His is also survived by many, too many to count, who met a stranger and ended up calling him 'Grandpa Bob' or 'friend'.

Robert Louis Andrews, late of Camby, IN, was born in Portland, ME, on October 18, 1927, as Robert Louis Arbacewski. He was the fifth of six children of Anthony Arbacewski and Katherine (nee McGrath). His father was brought to America at the age of 2 from what is now Lithuania, and his mother was the first born of Irish immigrants. His father changed the family name when Bob was 14 years old.

Back in Imperial Russia (now Lithuania) his ancestors were peasants and peasants were barred by law from attending school. The family history says that the town residents would meet secretly after work was done, with lookouts stationed for passing patrols, to cobble together a basic education. This passion for the importance of a good education was passed on to all the children of the family and was passed on by Bob to his own children.

Bob graduated valedictorian of his high school class at Cheverus High School in Portland, ME, and started college at the University of Maine at Orono. Soon after the end of World War II, Bob left college to join the Army Air Force. He did not resume his college career until his own children began theirs. Ultimately, he earned a bachelors and a Master's degree in the California State University system.

He married Phyllis Madelyn Howard, his only wife, on September 15, 1950, in Cleveland, OH. They were married until her early death in 1982.

He had many vocations - machinist, postal worker, janitor, and the one he loved the most - attending to the needs of those with developmental disabilities in Oregon State's Fairview Training Center.

Bob loved being retired. He would say that he was so good at it, they gave him a raise every year!

In the wee hours of Christmas morning, 2021, a good man died. He touched many lives; he made a difference.
To order memorial trees or send flowers to the family in memory of Robert Louis Andrews, please visit our flower store.