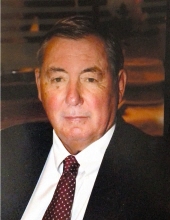 Robert George Libby, age 85, of Birmingham, Michigan passed away on Friday, April
15, 2022. He was born in Royal Oak, Michigan on August 8, 1936 to parents George
Remick Libby and Maxine Louise George. He was married to his loving wife and
best friend Anne Emilie “Jan” Brady for 45 years.

Bob was a proud member of Birmingham High School’s Class of 1955 and cherished
the many lifelong friendships, which began there. Following his graduation from
Western Michigan University with a Bachelor of Business Administration with a
major in marketing in 1959, he utilized his outgoing personality to begin a lengthy
career in a variety of sales enterprises. Ultimately, his path led to real estate where
he became a successful broker of three Century 21 franchises with Jan by his side.

He and Jan moved from their first home in Royal Oak to Birmingham where they
raised their two children, Sharon and Bret. During those years, Bob thoroughly
enjoyed channeling his love of sports as well as working with his hands to weekly
handball games with friends and many home improvement projects. He lovingly
engaged his carpentry talents during years of weekends spent at his beloved cottage
in Caseville, Michigan. Following Jan’s passing in 2010 he moved to Florida where
he remained until May 2021 when multiple chronic illnesses necessitated a move to
Indiana to be closer to family. He took great pride in his four grandchildren and
especially enjoyed attending their respective athletic events.

He is lovingly survived by his children Sharon (Dean) Vlasak in Zionsville, Indiana
and Bret (Tessa Bird) Libby in Royal Oak, Michigan as well as grandchildren Emily,
John and Grace Vlasak and Scarlet Libby. Bob is preceded in death by his self-
acknowledged better half, Jan, and his parents George and Maxine along with four
cats he devotedly cared for.

Bob never knew a stranger and would most certainly encourage all to cultivate
quality friendships and to cherish time spent in their company. One of his steadfast
friends in recent years has been his beloved rescue cat, Girlie. Memorials in his
memory, therefore, may be offered to New Beginnings Animal Rescue in Royal Oak,
Michigan. Their website is www.nbarmichigan.org.

A celebration of Bob’s wonderful life will take place at a future date this summer.
Online condolences may be left at www.indianafuneralcare.com

To order memorial trees or send flowers to the family in memory of Robert Libby, please visit our flower store.