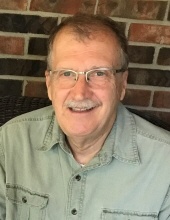 Robert Franklin Patton, 75, was born November 16, 1946 in Bloomington, IL, to Philip Franklin Patton and Lucy Catherine Mailer Patton. He passed away of pancreatic cancer on December 28, 2021 at his home in Fishers, IN.

Bob was a graduate of Normal Community High School and Eureka College. He served in the U.S. Army from 1970-71 in Portland, Oregon. He taught elementary school in Idaho, Michigan and Bloomington. In 1986 Bob began work as a social worker with the Indiana Agencies on Aging, retiring in 2012.

He lived his life for Jesus and showed his love for Jesus in serving others. He was known for his readiness to help anyone in need; friend or stranger. After his retirement, he was able to focus on volunteering. He spent many hours in various food pantries, and in playing his guitar for patients in the local hospital and nursing homes. He also served as a chaplain at Reid Hospital. He enjoyed small group fellowship. Most recently he found great satisfaction participating in a men’s bible study at Grace Church. He was completely genuine, showed great interest in people, and gave each person his focused attention. He loved his family; enjoyed music, especially classical guitar and oldies from the 40’s, 50’s and 60’s; motorcycles; steam engines; and fishing. Many of his favorite memories with family and grandchildren included hiking, biking, boating, and trips together.

In lieu of flowers donations can be sent to the Grace Care Center & Choice Food Pantry through the GCC foundation at http://gccfoundation.us/ (5504 E. 146th Street, Noblesville, IN 46062) or the charity of choice.

Services to honor his life will be held on Saturday, January 15 at Grace Church; 3:00pm EST, in Noblesville, IN (see address above). Visitation will be at 1:30pm. Internment will be Sunday, January 16 in the Kaufman Cemetery, (13300-13354 E 2100 North Rd, Hudson, IL 61748) at 1:00 pm EST/noon CST. Please note the time difference of one hour between Illinois and Indiana.
To order memorial trees or send flowers to the family in memory of Robert Franklin Patton, please visit our flower store.