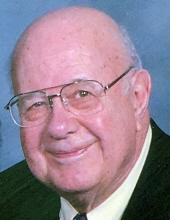 Robert Earl Robinson 97, of Indianapolis, peacefully departed this life on January 10, 2022 surrounded by family. Bob was born near Brownsburg, Indiana to Earl A. Robinson and Mildred Scherer Robinson on October 3, 1924. His father taught school in Brownsburg and Bob had lots of cousins from the Arbuckle, Scherer and Robinson families in Hendricks County. Later his family moved, first to Rochester, then Huntington, Indiana where his father was an editor at the Huntington Herald-Press. Earl Robinson passed away from leukemia when Bob was fourteen years old and after losing his father early in life, he always took great care of his mother, who lived to be 99 yrs old.

Bob graduated from Huntington High School and attended Purdue University where he joined the Lambda Chi Alpha Fraternity. When his family moved during his college years, he transferred and graduated from the University of Iowa. A football injury at Purdue prevented him from joining the U.S. Marine Corp he had signed up for. A true member of the Greatest Generation, he often spoke of his admiration for those who served in the armed forces and the friends he lost in WWII. On the day he left this earth for his new life, one of the last songs he had his Echo play was ”Battle Hymn of the Republic”.

He received his law degree from the University of Michigan Law School in 1956. He worked as a Deputy Attorney General then in private practice. He appeared before the Supreme Court of the United States in the landmark case Jackson v. Indiana (406 U.S. 715). He also did legal editing for The Allen Smith Company Publishers and was a speaker at seminars for ICLEF (Indiana Continuing Legal Education Forum). He was appointed by Gov. Robert Orr and later Gov. Evan Bayh as Inheritance Tax Administrator and Administrator of the Legal Devision of the Indiana Department of Revenue. After retiring, he continued to work as a private consultant for tax issues into his late 70’s. He married the love of his life, Ann on May 5, 1962 and was a devoted father to his two children Ruth and Von.

He was a member of the Indianapolis Bar Association, the Indiana State Bar Association and Second Presbyterian Church where he also taught Sunday School. He was a 60 year, 32nd degree Mason with the Scottish Rite in Indianapolis and 75 year, 3rd degree Master Mason with the Masonic Lodge Amity 483 in Huntington. He served on the board and as past president of the U of M Alumni Club of Indianapolis. As a recruiter for Michigan football under Bo Schembechler, he attended high school football games all over Indiana to assist the coaching staff in finding and promoting talent. His favorite places to be with his family and friends were the Columbia Club, Indianapolis, of which he was a long time member and visiting the campus for a football game at his beloved Ann Arbor, Michigan.

Along with his parents, he was preceded in death by his wife Ann (Blackburn) Robinson, brother Tye Robinson and niece Rickie Robinson Rosenberg.

Surviving are his children, daughter Ruth (Brad) Pate, son Von (Miho) Robinson, sister-in-law Kay (Rolf) Langehaug, niece Laura Langehaug, nephews Ron Robinson and Tom Langehaug, and three people who he made sure knew they were very special to him and were his grandchildren: Dylan, Olivia and Maria Pate.

Cremation services have been entrusted to Indiana Funeral Care. Family will have a private memorial. In lieu of flowers, please give to a charity of your choice or the University of Michigan Club of Indianapolis Scholarship Fund.
To order memorial trees or send flowers to the family in memory of Robert Earl Robinson, please visit our flower store.