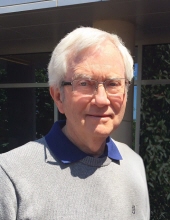 Robert (Bob) A. Hunt, 74, of Carmel, IN passed away peacefully on September 17, 2021 in his home surrounded by love and family. Bob was born in Wauseon, Ohio on September 4, 1947 to the late Cloyce and Arvilla (Clark) Hunt. He was married for 53 years to his wife Connie.

Bob was a 1965 graduate of Stryker High School in Stryker, OH and received his Bachelor’s degree in Civil Engineering from Tri-State University in Angola, IN in 1970. Watching construction of the Mackinac Bridge on family trips as a child to northern Michigan inspired him to become an engineer. He began his career with the Pennsylvania Railroad as a co-op student in college. He retired from Conrail as Division Engineer in 1999 and then worked as a consultant for CSX until 2007. Bob always cherished the friendships gained during his years on the railroad.

He was a member of Carmel United Methodist Church. Bob enjoyed being active in Carmel Clay Kiwanis after retirement. He loved his family and taking trips to Disney World and going on cruises with the grandkids. He was an avid Yankees and Purdue Boilermaker fan but was more than willing to cheer on Kansas State, IU and Notre Dame.

Along with his wife Connie, Bob is survived by his children Rob Hunt (Mae) of Fishers, IN and Kristin Sells (Brian) of Seneca, KS; sister Terry Sandau (David); grandchildren Luke and Jake Sells, and Rebecca and Robby Hunt.

There will be a memorial service for Bob on Thursday, September 23 at Indiana Funeral Care, Indianapolis, Harry W Moore Chapel, 8151 Allisonville Road, Indianapolis, IN
Visitation will start at 10 am and the service will start at 12 pm followed by a luncheon at a local restaurant for further conversation and reminiscing with the family.

A Celebration of Life will be held in his home town of Stryker, OH at the United Methodist Church on October 16, 2021 at 11 am.

In lieu of flowers, donations can be made in memory of Bob to Brain Support Network, PO Box 7264, Menlo Park, CA 94026 (www.brain support network.org) or to Lewy Body Dementia Association at www.lbda.org
To order memorial trees or send flowers to the family in memory of Robert A. Hunt, please visit our flower store.