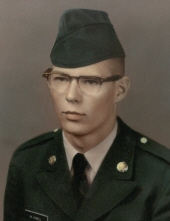 Richard (Dick) Lee McDowell, 74, of Greenwood, Indiana passed away Saturday, April 16th, 2022, at his home with his wife, Deborah and family by his side.

His love for sports led him to participate in basketball, football, track and field, and wrestling. He was a recipient of many honors and awards, but Dick’s most prized possession was in 1966 he was “Outstanding Senior Athlete” in Waterford Township High School.

Dick served our country in the U.S. Army from December 28th, 1967, to October 30th, 1972, having completed tours of duty in Vietnam and Korea. He received numerous commendations and achieving the rank of SP5.
Dick worked as an inside/outside sales representative for some of the largest steel companies in the U.S. across the Southeast and East coast.

Dick is survived by his wife of 33 years, Deborah (Kritsch) McDowell, daughter Michelle (Eric) Northam of Georgia and 3 grand-children (Kaitlynn, Brianna, and Chase), his sister Louann Babka (Dana) of Michigan, his brother-in-law Michael (Lynda) Kritsch, and many nieces and nephews.

Dick loved his wife dearly and cherished her. He was a loving and caring friend.

Visitation is from 11:00am until time of service. A private burial will be held at a later date at Crown Hill Cemetery in Indianapolis, Indiana.

In lieu of flowers, donations can be given to the Wounded Warrior Project.

To order memorial trees or send flowers to the family in memory of Richard Lee McDowell, please visit our flower store.