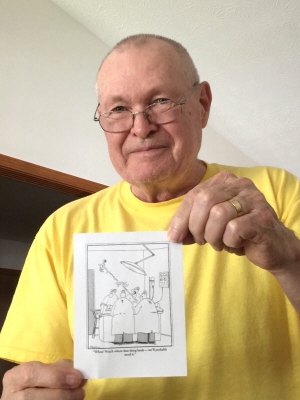 Richard Glen “Dick” Morris, 83, of Indianapolis, IN, died peacefully at home, surrounded by family, March 25 due to complications from Parkinson’s Disease and Lewy body dementia.

Born March 9, 1939, to George B. and Cleah Chambers Morris, of Cambridge City, IN, Richard graduated from Lincoln High School in 1957. He attended trade school to study electronics before entering the Air Force, where he served in the U.S. and Germany. After his tour of duty, he settled in Indianapolis and spent nearly 40 years in the electronics field, working at Telonix, Texscan, Wavetek, and Fujitsu.

Richard grew up in the Cambridge City Presbyterian church, and, like his father, was a Master Mason who earned his thirty-third degree in the Scottish Rite. In his free time, he enjoyed spending time with family, “tinkering,” restoring hit-and-miss farm engines, working at Mt. Lawn Speedway, completing household projects, reading about history, and seeking out great tenderloins. Other interests included NASA, Mac computers, technology, steam engines, and classic country music.

Richard was preceded in death by his brother George R. Morris, his father George B. Morris, his mother Cleah Morris, and former wives Judy Miller Morris and Deloris Blacker Morris.

Based on Richard’s wishes, no services or interment will occur. To honor his memory, please consider donations to Traditions Health Hospice (or your local hospice), the Lincoln High School Marching Band in Cambridge City, IN, or the Cambridge City Public Library.
To order memorial trees or send flowers to the family in memory of Richard Glen Morris, please visit our flower store.