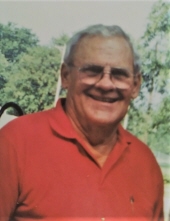 Richard D. Houk, 90, of Indianapolis, Indiana, died peacefully at 1:30 pm, Wednesday July 14, 2021. A former resident of Ocala, FL and West Lafayette, IN, Dick was born and raised in Decatur Il. He was the son of Lawrence and Mabel Houk, the youngest of five siblings. All have preceded him in death.

While in high school, Dick met and fell in love with Patsy Stoutenborough. They dated throughout high school and married on May 19, 1951. They recently celebrated 70 years of marriage, which is a testament to their love and devotion. Patsy was a devoted caretaker during Dick’s illness.

Mr. Houk was a proud Air Force veteran. Upon leaving the service, he joined International Harvester Co. in 1958. After a successful career, he was able to enjoy many more years of fishing, traveling, and making many new friends in Ocala, Florida during his retirement. Dick and Patsy returned back to Indianapolis in order to spend more time with family.

The family appreciates the loving care of the entire staff of Anew Hospice and Greenwood Meadows.

A private family memorial will be held at 3:00pm, Wednesday July 21st.
To order memorial trees or send flowers to the family in memory of Richard Dale Houk, please visit our flower store.