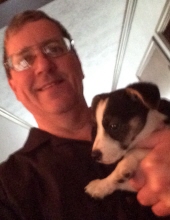 Richard Benson Van Hise, 63, passed away peacefully at home on March 6, 2022. He was a facilities engineer at University Hospital, Indianapolis, retiring in 2015. A US Navy veteran and Purdue engineering graduate, Rick was someone who could fix virtually anything around his workplace and later his home. He was also known for his collection of gas-powered bikes and trikes that he was constantly working on. He is survived by his wife of 33 years Tracy Lynn Van Hise, son Kurt Benson Van Hise, sisters Carol Van Hise, Charlotte Watson and Sheree Van Hise, niece Courtney (Jason) Parks Roeber and great nephews Samuel, Ian and Mac Roeber. Richard’s parents Oliver Benson Van Hise and Marian Rogers Van Hise preceded him in death.
To order memorial trees or send flowers to the family in memory of Richard Benson Van Hise, please visit our flower store.