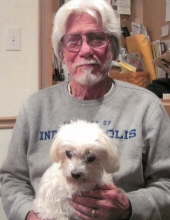 Philip Lee Martin, 80, of Indianapolis, Indiana passed away Friday, April 8, 2022, at his home with family by his side.

He was born on Monday, December 29, 1941, in Indianapolis, Indiana to the late William and Glenda (Anderson) Langland. Philip graduated from Creston High School in 1960 in Grand Rapids, Michigan. He participated in athletics and played football and baseball.

Philip worked for Wolverine Worldwide in Rockford, Michigan and retired in 2007 after 38 years of service. After retirement he started working for Footwear Supply in Franklin, Indiana in August 2007 until 2 years ago when he took a leave of absence due to health issues but was still considered an employee.

Philip was a talented, creative man. He designed two custom vans and his hobby was building model train sets and cities. He took immense pride in both.

He is preceded in death by his parents, William and Glenda Langland and grandson, Joshua Burgess.

Philip loved his wife dearly. He cherished her. He was a family man. Family meant everything to him. He was a good friend to many. Friends and the guys at work that he mentored were family. He never met a stranger and would do anything for family and loved ones. He loved God and attended Blessings of Love Church.

Funeral service will begin at 1:00 PM


To order memorial trees or send flowers to the family in memory of Philip Lee Martin, please visit our flower store.