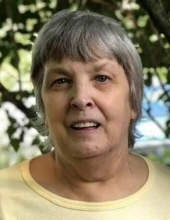 Peggy Sue Yadon, 74, of Indianapolis, passed away October 14, 2021 peacefully surrounded by her family at her residence.

Peggy was born August 6, 1947 in Tennessee to Henry and Lois Yadon (Booker). She had one brother and four sisters. She was a graduate of Mount Vernon High School in Fortville, Indiana.

Peggy was a loving and devoted mother and grandmother. She was an active supporter of veterans and had been a member of the American Legion and Veterans of Foreign Wars.

Memorial donations can be made to the family.
To order memorial trees or send flowers to the family in memory of Peggy Sue Yadon, please visit our flower store.