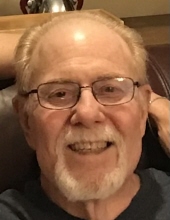 Paul was born Thursday, July 6, 1939, to the late Mitchell and Sara J. (Weiner) Feinman in Brooklyn, New York. In his youth he was an Eagle Scout.

Paul received his Bachelor’s degree from Bradley University and his Master’s degree from the University of Illinois. Paul was an avid lover of arts and enjoyed watching and even participating in local stage theater. Paul was an accomplished radio personality and worked for numerous radio stations throughout his 40-year career. When not in the radio studio, Paul also enjoyed disc jockeying for many special occasions. He was also an Adjunct Professor (Butler, Marion University, IUPUI, University of Indianapolis) of Speech and History of Theater

Paul created and hosted the daily radio show Indiana Today, which aired in Indianapolis and featured a Friday variety show Jabberwocky Junction. He had a vast knowledge of trivia, music, and movies.

Paul was a friend to all who knew him.

In lieu of flowers, contributions can be made in Paul’s honor to the International Foundation for CDKL5 Research at cdkl5.com/donate.

Service will be streamed, see link below.

To order memorial trees or send flowers to the family in memory of Paul Irwin Feinman, please visit our flower store.