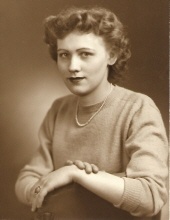 Norma Jean Hurley — known simply as Jean — was born on May 10, 1928 to Roscoe and Van (Gibson) Hurley in Indianapolis, Indiana. She grew up alongside her two older brothers, Roy and Marvin Hurley, and followed in their footsteps as a 1946 graduate of Arsenal Technical High School.

On April 13, 1956, Jean married Edward Morris Evans. Their daughter, Lesley Lee, was born in 1965, followed by their son, E. Mark, in 1968. Although they divorced, Jean and Ed maintained a lifelong friendship until Ed's passing in 2007.

In 2001, Jean retired to watch her grandchildren, Sammi, Allie, and Cameron.

One of Jean's greatest passions in life was her involvement with the Murat Shriners of Indianapolis. Her husband, Ed, served as Potentate in 1977 and she served as Imperial Maharnee. Jean was also an active member of the Smyrna Shrine Guild until her passing, where she met many lifelong friends and found camaraderie and community. She served as the Smryna Guild Maharnee in 1972.

Jean also had many diverse hobbies and passions. She was a voracious reader and frequent visitor of her local library. She loved jigsaw puzzles, crossword puzzles, and TV game shows.

She was a fighter until the very end, beating lung cancer at the age of 90 and defying many other predictions from her doctors and medical staff.

A special thank you to Suburban Hospice nurses and aides, especially April and Abby, and her longtime aide, Nancy, who took special care of Jean in the last years of her life.

In keeping with Jean's wishes, no formal funeral services will be held. A private ceremony will take place for the immediate family where her ashes will be spread to her final resting space.

In lieu of flowers, the family asks that donations are made to the Shriners Hospitals for Children in Jean's memory.

To order memorial trees or send flowers to the family in memory of Norma Jean Evans, please visit our flower store.