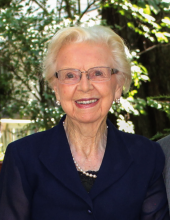 Norma Aileen Whitcomb (98) of Indianapolis, IN, stepped into the presence of her Savior on December 12, 2021, while at home. She was born July 29, 1923, in Kingston, NY, to Lester Roy Vining and Marie Edna (Barnes) Vining.

Norma graduated from Houghton College with a major in Christian Education and minors in Art and Education.

She married Robert Edmund Pritchett on June 23, 1950. Norma and Robert moved to Dallas, Texas where Robert graduated with a Th.M from Dallas Theological Seminary.

They moved to Winona Lake in the fall of 1968 for Robert to attend Grace Theological Seminary, where he was enrolled in the Th.D program. On March 4, 1969, Robert died while out jogging. Norma and sons Dan and Tim moved to Kansas, where Norma taught art and counseled at Berean Academy.

On January 1, 1971, she married Dr. John Whitcomb, whose wife Edisene had previously died. Together with her two sons and his four children, they became a family of eight.

Though Norma stayed home to help raise the children, she ventured into real estate to help feed the family. In addition, she was recognized as an accomplished painter, and she authored several books and audiotapes. After the children were on their own, she had the opportunity to travel with her husband, Dr. Whitcomb, on speaking engagements across the country and around the world. Their focus was to teach God's truth and represent Grace Theological Seminary.

After Professor Whitcomb finished teaching at Grace Seminary, John and Norma retired to Florida. A few years later, they returned to Indiana and made their final home in Indianapolis.

A Celebration of Life will be held at Colonial Hills Baptist Church, 8140 Union Chapel Road, Indianapolis, IN, at 10:00 am on Tuesday, December 21st. Visitation with the family will be held at Colonial Hills prior to the service. Interment will be at Oakwood Cemetery in Warsaw, IN at 2:30 p.m. Live stream link will be posted on Whitcombministries.org
To order memorial trees or send flowers to the family in memory of Norma Aileen Whitcomb, please visit our flower store.