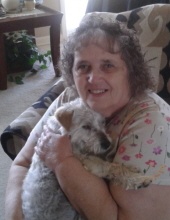 She was born on Monday, November 27, 1950 to Robert Rex Anderson Sr. and Mary Louise (Hicks) Anderson in Indianapolis, Indiana. Nancy grew up on the eastside of Indianapolis. She graduated from Warren Central High School in 1969. She worked for many years with Indianapolis Metropolitan Police Department as a Violent Crime Compensation Liaison and at one time was the Administrative Assistant for the Chief of Police.

Nancy was a member of East Rawles Church of God for 39 years. She was the Secretary Treasurer for the church for many years. Nancy had a nursing home ministry that she was enthusiastic about. She would go to different nursing homes in the community and pray and minister to residents, decorate for the holidays, she would find out what people needed and make sure they got it. She had a Christmas name tree that others would draw from, and she would wrap and deliver the items to those who needed them.

Burial to immediately follow at Washington Park East Cemetery, Indianapolis, IN.
To order memorial trees or send flowers to the family in memory of Nancy Lou Perry, please visit our flower store.