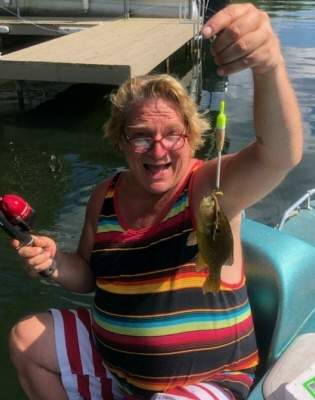 We are gathered here today to get through this thing called grief, immense grief on the final curtain call of our ferociously funny brother, Tim.

He was the first-born son of Judith Ann (Zimmermann) & Michael Eugene Morrison born on July 11, 1964. A day that we are quite certain the mold was not just broken, it was most likely nuked and buried deep within the Earth’s core, or snatched by alien beings for in-depth analysis.

Tim began raising hell at an extremely young age. From skipping school in the first grade and hiding in the bushes all day, to crawling through the vents at St. Barnabas to frighten the girls away from the Vanity mirror by giving his best God-voice impression, we are sure he was only trying to do the Lord’s work.

As Tim became a young man, he really began honing his comedic skills as a prankster in high school. With his trusted ability to disguise his voice, he would gleefully call himself and his brother off of school for the day while pretending to be his Mother. But let’s be fair… He also dedicated an entire exterior wall at PMHS to his Mother by painstakingly painting the word “GRUNTSY” in tar, and covering it in sand. She must have been so flattered.

A man of many aliases, (Michael, Mimmy, Emilio Mim, The Gay Cabelero, Mims Mambley, Rimply Pim, The Southside SPAM man) most of us knew him as Tim. An ordinary name, extraordinary human being. Always on and ready to perform, to create mayhem and chaos in mundane situations. Always unpredictable, even in death.

Come and let us hear your stories on April 9, 2-8 pm at Lighthouse Landing Apartments Clubhouse, 6640 Heron Neck Drive, Indianapolis, IN 46217

While not necessary, Contributions in Tim’s name may be made to Step-up @ http://stepupin.org. This was the ONLY organization that even came close to cracking this nut.
To order memorial trees or send flowers to the family in memory of Michael Timothy Morrison, please visit our flower store.