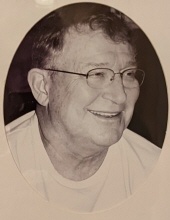 Michael attended Arsenal Technical High School and later served in the Air Force and was stationed in Alaska. After his military service, he married the love of his life, Judy Copas on November 10, 1968, in Indianapolis.

Michael retired from Kroger Company where he started as a stock clerk and worked his way up to a bakery technician which allowed him to travel throughout the Midwest, training the bakery employees for the new store openings.

Michael loved to golf and even used his "grocery store connections" to provide lunches for the Key Benefit Administrators' annual Golf Classic benefiting Riley Hospital for Children and even played in the tournament himself every year he was able to. He was also a huge Yankees fan and we mean HUGE! The first basemen were always his favorites (Mickey Mantle, Don Mattingly, and Tino Martinez)

Michael is preceded in death by his mother, Mildred McCune, and his brother, Patrick (Doris) Cantwell.

Memorial Service will be held at 6 PM on Monday, December 27, 2021, at Indiana Funeral Care, Greenwood, IN with visitation starting at 4 PM.
To order memorial trees or send flowers to the family in memory of Michael Eugene Cantwell, please visit our flower store.