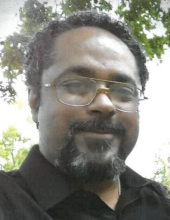 Michael began his Earthly Journey on January 8, 1976, when he was born to Felix and Vivian Renteria in St. Louis, Missouri. At the age of 3 months, he traveled to the Mariana Island of Guam where his father was serving in the U.S. Army. In 1977 his family moved to St. Joseph, Missouri then, in 1981, to Eatontown, New Jersey. Finally, in 1984, his father’s military duties brought Michael to Indianapolis, Indiana which became his beloved hometown.

Michael always shined as a self-motivated student. He excelled in the Indianapolis Public School Academically Talented Program and made great contributions to Arlington High School’s (AHS) basketball team and jazz band as an alto saxophonist. He graduated AHS with the class of 1994. He furthered his studies with Ivy Tech Community College’s business management curriculum.

On March 21, 1998 (his parents’ anniversary), Michael married the former Tosha Felice Dixon in Our Savior Evangelical Lutheran Church (OSELC). He immediately embraced, loved, and provided for Tosha’s three young boys and unquestionably raised them as his own. Tosha and Michael were additionally blessed from their union with the births of Miguela Renteria (1998) and Nadia Renteria (2000). Michael’s five children lovingly referred to him as “Papi.”

Michael was always intrigued by employment opportunities that provided service to others. He worked at various call centers to include financial counseling, computer technical support, consumer services coordination and medical services. He also expertly managed many chain stores and businesses.

On November 28, 2021 Michael’s house caught on fire. As a result, he sustained great injuries to which he succumbed on December 22, 2021.

Michael is survived by his father, siblings Christopher Cannon-Renteria, Felicia Renteria Salgado and Felix Renteria III, his wife Tosha Renteria, daughters Miguela and Nadia, sons Denzel Means, DeOnte Means, and DeMarcus Means. He also leaves behind three grandchildren and 11 nieces and nephews.
To order memorial trees or send flowers to the family in memory of Michael A. Renteria, please visit our flower store.