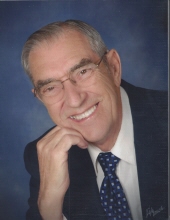 Merlin Brewer Outcalt, born August 26, 1928 in Reedsburg, Wisconsin, died Sunday evening
November 7, 2021 at the age of 93. He married Ruth Ann Auble on September 22, 1950 shortly
before he served in the Army in Korea. They were married 62 yr before her death in 2012. He is
survived by two sons, Roger Lee Outcalt of Indianapolis, In and Dennis Alan Outcalt of Houston,
Tx. A third son, Steven Len, died in 1982. Merlin was the son of Raymond Outcalt and Ruby
Brewer. Merlin attended elementary school in Wisconsin, Southport High School and attended
Indiana Central College (now University of Indianapolis) and earned a Masters Degree in Social
Work from Indiana University.
His degree in social work, along side a deep faith, motivated Merlin to a life being in service to
others. A great majority of his career was spent serving children and youth who experienced
emotional, behavioral and legal problems. While he served many individuals directly, he spent
most of his career rebuilding youth serving programs to provide more comprehensive and
responsive care,
Dad started his career as a probation officer at the Marion Juvenile probation in Indianapolis.
From there he directed the Traveler’s Aid Society in Cincinnati. He moved to Palatine, Il where
he directed Methodist Youth Services (serving youth in Chicago’s inner city) and later worked
for the United Methodist Church, Board of Global Ministries. Next he moved to Chapel Hill,
North Carolina where he directed a program of the University of North Carolina: Group Child
Care Consultants. Merlin returned to the Midwest (Decatur, Il.) where he directed Webster
Cantrell Hall, a residential youth serving program for over 25 yr.
While his professional career was about service to others, so was his private life. He was a
professional volunteer. Most all his volunteer efforts were in the United Methodist churches he
faithfully worshiped in. He was a youth group leader, served on and chaired most every
committee in every church he served, was Lay Delegate to Annual Conference, served on ad hoc
committees at church and in the community (especially during his time in Decatur, Il.). He
became a “nomad” when he and Ruth Ann joined NOMADs, a mission oriented group of RV ers.
He also served on the NOMADs Board of Directors.
He not only served others, he served his family as well. Not just his wife and kids, but the
extended family. He kept in regular contact with family to see how they were, what they were up
to. He was the source to go to to find out what was going on with others in the family. He would
travel to visit them. Go out of his way to see a family member on his travels elsewhere. One
cousin identified him as the “favorite uncle,”adding he was probably everybody’s favorite uncle.
Another noted he was the kindest person with genuine caring for those he connected with.
Much loved and respected by all the lives he touched. His absence is a big hole in our lives. He
will be long remembered and sorely missed.
To order memorial trees or send flowers to the family in memory of Merlin Brewer Outcalt, please visit our flower store.