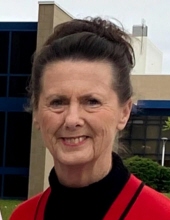 Maxine graduated from Washington High School and went on to attend Ball State University. While there she joined the Pi Beta Phi sorority and met lifelong friends. After teaching for many years, Maxine eventually established herself as an accomplished salesman. Like her father, she moved into automotive sales. At one point, Maxine and her late husband Bob owned and operated McGeehan Motors in Marion, IN. At the time of her passing, Maxine was still selling cars at Lockhart Cadillac in Fishers, IN. Maxine loved to keep sharp by playing solitaire, doing puzzles, and could not be interrupted if Jeopardy was on. She had a keen wit and a great sense of humor. She travelled back home to England when she could and also made trips to Scotland, Ireland, and France. Her last overseas trip included Norway with grandchildren. Stateside she enjoyed seeing family in Florida.

Maxine’s happiest moments were when she was with her family. She is survived by her children: Karin (Tom) Molt, Michael (Laura) Kenney, and Traci Robinson, and her grandchildren: Max Molt, Emily Robinson, and Samantha Kenney.

She was preceded in death by her parents and her husband Myron Robert (Bob) McGeehan.

In lieu of flowers, memorial gifts can be made to Breast Cancer organizations. She is a survivor, in various forms, and will live on in our hearts with a tremendous amount of love.
To order memorial trees or send flowers to the family in memory of Maxine McGeehan, please visit our flower store.