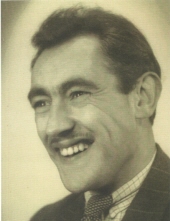 
Our father kept the memories of a formal presentation with flags flying and the sounding of taps as part of his youth. That is what he remembered of his father’s funeral ceremony. There were funeral honors expressing a deep gratitude for Sergeant Otto Cornelis Pieter Koen Michels’ service to the nation at the National Military Cemetery in Den Haag. He was proud that his father and grandfather both had received national Royal Military Honors. Maximiliaan Louis Michels has passed away and yet his kind and good spirit will now also be honored and long remembered by his family.

Born in the Dutch East Indies Max was soon to move back with the family to the Netherlands upon his father’s retirement from military service. It was as a teenager that his spiritual devotion began to develop after experiencing the suffering from his father’s death in 1933. He did well in school and his knowledge of four different languages helped him during the war years when he was taken to become part of the forced labor in Germany. Upon the allied victory he became a sergeant in the U.S. Army Dutch Force Regiment and was designated to provide the German captives medical attention at the prison camp on the outskirts of Paris into 1946.

Back home in the spring of 1948 he married and then honeymooned with Aatje (Alida) Prins in England. They then started raising a family back in the Netherlands and soon saw an opportunity to come to the U.S. in 1955. Living in the south and midwest he experienced promotions in both the Ward Baking Company (Wonder Bread) and later in the government as the regional director of the Defence Contract Audit Agency. After a very successful career with the government he and Alida enjoyed their retirement by camping across the nation for a year and doing religious charity work in the Caribbean while living adjacent to the Gulf Islands National Seashore in Pensacola Beach. Later they lived in Mt. Lebanon, PA, and finally the Fishers/Carmel, Indiana area. We all celebrate the joy that both he and our mother have given us and know that they are now happy together once more.

He was preceded in death by his father Otto Cornelis Pieter Koen Michels, his loving mother Hendrica Maria Michels-Roosen, and brothers Frederik and Henri as well as half brother Otto Michels. Still living are half brother and sister Cornelis MacKaay and Metha MacKaay. Max was also preceded in death by his loving wife Aatje (Alida) Michels-Prins and his daughter Marion. He is survived by the remainder of his sons and daughter, his grand-children and his great grand-children. We will still have fond memories of his poetic skills:

“Oh yes I loved life all those years,
So full of joy, but also tears.
We were together everywhere,
cause of the love we all did share.”
To order memorial trees or send flowers to the family in memory of Maximiliaan Michels, please visit our flower store.